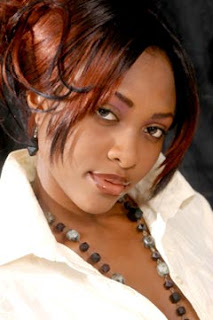 A self-taught artist and TV presenter, Vanessa Nzediegwu is one of the most sort after actresses in the Nigerian film industry.

Wetin Dey?, among others, as well as being the presenter of ‘Box Office’, a regular series on Nollywood-related events.

That’s not all. Vanessa is also a budding entrepreneur, as she currently manages her business, Vee Blue World Enterprises.

Recently, in her quest to give voice to the voiceless artists, Vanessa considered it imperative to set up a Foundation, known as Informally Trained Artists, which seeks to give exposure to those artists of sorts, who were not privileged as a matter of record to pass through the formal art school to merit being addressed as trained artists.

Late last year, this group of artists led by Vanessa stormed Didi Museum, Victoria Island, where they held a group exhibition, under the title, Serendipity.

Vanessa, in this engaging encounter, traced a connection between her life as an actress and a painter.

I’m from Delta State. I grew up in the north. I went into the film industry in 2002. I’ve been an actress since then and have been doing programmes on film making and screen writing as well.

I’ve also been a presenter on a “Box Office” a programme on actors and actresses and event coverage.

This year, I decided to launch myself into the art world professionally. I had my first exhibition in August this year, and it was fantastic.

It then occurred to me that I could actually make money from my talent. I had a second exhibition at the National Theatre, Iganmu, which ended just two weeks ago.

So far, the field has been favourable, rewarding and fantastic. I would say that I’m privileged to have ventured into the world of painting with great enthusiasm that I decided to create a platform for other people to be exposed.

You are a self-taught artist. How?

It’s a God-given talent. I’ve been drawing and painting with portal colours, water colours, crayons and other materials right from my nursery school days. So I knew I had the talent in me. I further learnt the art from watching other artists paint.

When you have talent you don’t need too much activity. Somehow, I just found out I could draw and paint. I think I tapped that part of my talent from my dad; then, with the inspiration I get from people, I build things up.

What informed your kind of art?

I’m a realist and a surrealist as well. I would say that I am versatile when it comes to painting, because I do mixed media and I also do portraits.

I use oil on canvass and I use pastel chalk and pen. So it’s general. I can’t say I’m a surrealist without saying that I’m a realist. I do all.

Let’s talk about your acting career?

I’ve been on and off Nollywood for about four years. I haven’t really been in it for a stretch because when I started I was in the northern part of the country.

I had to go to the east for auditions then go back to the north and stay there for a while. I returned to the industry this year when I came back to Lagos.

I’ve done about eight movies like Sins of Omission, 2002 (played the last daughter of Pete Edochie). I left after that movie and came back mid 2003 when I did Touching Love by TChidi Chikere, I played Omotola (Jolade-Ekeinde)’s younger sister – the good sister that keeps her on track. Immediately after, I did Broken for Luck – with Omotola again.

After that I did I Am Not Stupid. The last movie I did was Message. Apart from the movies, I have also done TV series for MNET called Edge of Paradise and the last one I did was Wetin Dey for BBC World.

Between painting and acting, which of the two holds a brighter future for you?

I will spend the rest of my life doing both. It is very possible because they are connected. For the movies, people can see you on screen, and you can also make your impact felt with your brushes and canvasses. So you are passing the same message across.

Are you not thinking of settling down as woman?

I’m single but not searching. I have had several proposals in the past, but I am taking my time to avoid regrets afterward. Perhaps, to find the right person. Marriage is not something you just rush into.

What’s your idea of the right person?

You have to be natural. Be yourself; rich or poor. That really trips me in a guy.

Right now how many guys are in the queue?

Do you realize that you have a very luring and charming eyes?

Yes! I guess so. I only know that God have made my eyes so beautiful. I use them to pass messages across. On screen, I use my eyes to lure my male opponent.

How do you feel when you are entangled in a love story?

The movie is very technical and so it is the information we want to pass across you really get and not what really happens. That is why we are acting. We make you believe what we want you to.

Do you like the kind of suggestive roles you play in television series?

That role is something I never dreamt I would ever do. The last series I did – Edge of Paradise— I played Tola, the naughty, nasty and bad girl.

When some people saw my character in Wetin Dey, they wondered why I took the role because they felt it does not suit me.

But I believe it is all acting; I’d never imagined myself in that situation so it was quite challenging putting myself in that character and I’ll say it really brings out the actor in me because it is not every actor that can play such roles so well. I never ever thought I could bring myself that low to Bilkisu’s level.

Filmography: Sins of Omission, Message, Touching Love, Broken For Luck and I am Not Stupid.