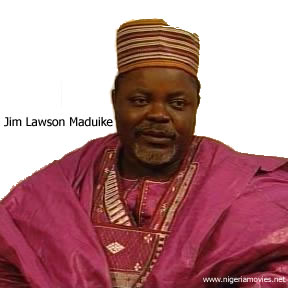 As an announcer and newscaster, Jim Lawson Maduike was one of the golden voices of radio and made quite a name. He is still making a name but this time as an actor after over twenty years in broadcasting.

The Imo State born broadcaster, voice- over artiste and actor worked for FRCN for fourteen years, Ray Power Radio as a pioneer staff for three years and then for MINAJ for another three years before throwing in the towel.

Now, he is holding sway as one of the actors Nigeria could boast of with over seventy films to his credit since he came in 2004.

He speaks on his life as a broadcaster and the new feelings in the movie adding that the first day he was to act, he was very uncomfortable with the heat of the light.

"Professionally speaking, I don’t miss anything except my professional relationship with my colleagues because I believe that once a broadcaster, is always a broadcaster. Even if I am acting, I think I am broadcasting. I don’t think I really miss anything. The microphone which I see as an abstract is no longer there looking menacingly at me. But in the movies now, it is also there but on top of my head at times.

FRCN attracted the greatest number of years for me in my broadcasting years. I gave fourteen years to FRCN. After that, I had a stint with Ray Power Radio as a pioneer staff before going to Minaj where I also was part of the radio. Everything put together, I put in twenty one years into the radio.

I joined FRCN in 1980 and left in 1994. I think it was the hand of fate I never saw a studio all my life before then. I was brought up in the rural community. I never was a city man. I was born in Godogodo a rural community in the Kafanchan area. I remember I saw electricity for the first time in my class seven when we went for our entrance exam and very surprisingly someone touched the wall and there was light in the room. It was a shocker because in my village of Godo Godo where I was born, I never saw such things. I so treasure the place because of the impression it made for a small child like me.
I come from Umunwolave in Guamo Obire in Nkwere LGA of Imo State.

I had this uncle of mine who was a driver for the FRCN, Mr. Richard Unawka. He was assigned to the former Zonal Director of FRCN, Mr. Sunday Young-Harry. The driver came across me and said, you are very good in communication. You conduct children service, and you preach on the pulpit. The man said he felt I could make it on radio. So I heeded his advice that we go and face the radio audition exercise.

So when I went, the late Christian Awuzie, principal announcer then arranged an audition exercise for me and it was conducted by Theresa Young who is now the Manager for FRCN Calabar, I guess. We were 25 on the list but only the two of us were successful. John Senaya and I scaled through. They wrote us a letter to say we were successful and we should prepare for training. In preparation to that, I was given a 30 minutes programme Mid Day Thythan to present. I was a green horn in the place. I was taken to the library where records were compiled for me. I guess on the first day, I may not have sounded right but it went on until I went for training. I believed in what I was doing and I was diligent about it. I was a junior announcer, then senior announcer before I was getting set for the principal grade and I opted for retirement.

The network news belt on a Monday, I was surprised it was like a dream. I went on a prayer session. I never expected it. But on that day the driver came for me and I went piched up the bulletin and there I went on network. I am a very strong Anglican.

This interview may not be enough to talk about this. For instance, I was part of the pioneer staff of Radio Link. My respect goes to the person who muted the idea. Halifa Baba Ahmed was Assistant Director Programmes. We had the idea and saw it to fruition. Bakau Mohammed is still there. He was one year ahead of me. We called him Zakemoh. The only Alhaji DJ on radio. You make me remember with nostalgia we didn’t have room for ethnic bias. God has blessed his work. His is deputy director now.

One of the high points of it all is FRCN was being the first voice on FRCN from Abuja. In 1990 when Babangida decided to take the independence for the first time in Abuja. I had come back to Lagos from burring my father in Imo State, I got a signal to report in Abuja. We had an experiment which lasted for one month. You know we didn’t have equipment then so we experimented on NITEL telephone line. The good thing was that we went to Abuja with a complete team. The typists were fourteen the ones we met and we decided to retrain some of these staff to our kind of ways. Bisi Olatilo was in that beat with me. Oh it was fun to be the first voice on that radio.

I am very proud of that station till tomorrow. I have no apologies to anybody. I left FRCN because I was sad with the system so had to leave.

I returned from FRCN in April 25, 1994 and sometime in 18th September, Raypower came for me to join them about seventeen days of their being on air. When I saw the condition of service, I moved on to the station. While I was there, Minaj came calling and gave a lot more promise. So after two years, I moved on to Obosi for Minaj to help strengthened their programming. I reported to Obosi on June 3rd, 1996. My happiness was that when I was at Minaj, I grew, I was employed under a banker turned G.M of a station. But things were sorted out. I put in three years in Minaj. Don’t consider me a professional prostitute but I believe so much in myself.

I consider myself a part of the movie world as a broadcaster because it is all about communication. When I came, I found out it was not very strange. Some people who know me then said I should come and take a role. I featured in Her Majesty. I played about three scenes, in that film. I had no crocodiles in my stomach because I have always been used to that. But I was worried about the lighting which I was very uncomfortable with. I complained and the director said I should cool down because this is movie. After that, I may have done more than 75 movies since March 2004 when I found myself there. I did The Masters, My Conscience, The Trust, Queen of Aso Rock, Lust for lust, Atonement, National Cake.

The movie industry is still a young industry. I don’t even want to compare it with the FRCN where I came from because they are not comparable. FRCN has come a long way. The history of broadcasting in Nigeria dates back to 1934. We were getting information by the help of the P & T then.

But I tell you the movie industry has a bright future especially with the current reform going on. Most people didn’t take the industry serious in the early days but now that the right calibre of people are beginning to come in, the industry will begin to chart a new cause.