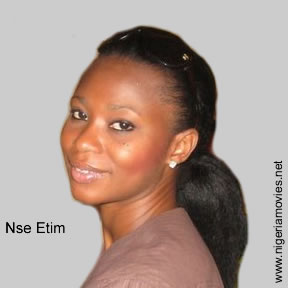 You may not be acquainted with her until you are privileged to watch, “Re-Loaded”, a new movie produced by Emem Isong. And when you do then, you will begin to understand this writer’s fascination and respect for her delivery in the new movie.

Her name is Nse Ikpe-Etim and she’s one of the privileged actresses whose recent movie exploits have pitched them in contention for the crown of Best Female actresses at the forth coming UBA-AMAA awards billed to hold next month in Yenoogoa, the Bayelsa State capital.

She gained national acceptance when she played the role of Omoze, wife to super-actor Ramsey Nouah in that thrilling ‘Re-Loaded”, a movie currently receiving accolades across borders and which has gained for the movie Director, Lancelot Oduwa Imasuen a nomination at this year’s edition of AMAA award.

Nse is not a new actress per se, because she’s starred in several other flicks that include a role in a TV soap,”Inheritance” and which was also produced by Emem Isong, ten years ago. She then went on to do other things that are not related to acting.

Re-Loaded, a story that resolves around cheating in relationships and its attendant consequences is certainly not her last film as she also starred in two yet to be released movies, “Guilty Pleasures’ and “Edikan” both produced by Emem.

Although, Re-Loaded is one movie that may launch her into the mainstream movie world, Nse told HVP that for several years, she had been on the background helping to build the stars of the industry.

“Unknown to many I was behind the screen helping to build stars through my role as a technical and support hand”.

And while behind the camera, Nse claimed she felt empty and unfulfilled in her quest for creative exploration. And in her search for fulfillment, she made brief stop-over at Rhythm and Cool FM, where she worked as an on air personality, before moving on to pick a job in the bank, a job which did not last the day. Ace producer, Jeta Amata, whom she described as “a very good friend of mine for 13 years’ introduced her into the acting profession. ‘Jeta and I have been friends for 13 years.’ she replied, avoiding to use the word, ‘lovers’.

A graduate of Theatre Administration of the University of Calabar, Nse is a pretty lady from Akwa-Ibom state and she’s in her early thirties.

Re-Loaded is the first movie that she has featured in and playing a major role. “I was a bit frightened, especially acting alongside a man.”.

She claimed that “even after the movie “I am still afraid because I want to be able to give my audience a quality delivery.”

The actress who says her ambition is to make it to Hollywood, wouldn’t however wish to talk about her love life. But it’s believed that, Nse may have been in and out of relationships that never led to life of matrimony.

She named, Stuffy Loral, an American actress and Nigerian Joke Silva as her screen idols. “I grew up at a time when there was nothing like Nollywood. For me, Stuffy Loral and Joke Silva are my sources of inspiration.”

Nse was one of the Nollywood stars that graced this year’s edition of BOBTV, which ended last week at Sheraton Hotels, Abuja. She had arrived the festival venue, dressed in modest attire, and in the company of her friends, as well as her producer, Emem Isong, where HVP cornered her for a chat.

According to Nse, veering into other fields of life to make ends meets, mostly accounted for the partial delay in launching herself into the movie world. Marriage, she believed is a game of choice. “I think, every woman has a choice either to marry or not.’she said.

For her, writing remains an integral part of her entire being. ‘I love writing. And I can’t stop writing. Right now, I’m assisting Jeta Amata in his next series, which is on the story of ‘Queen Amina. Jeta Amata has faith in me, as well as Emem Isong.”

Nse believes that as a growing industry, which is not devoid of its ups and downs, the movie industry will someday emerge to become the major tool for economic development of the country.

Aside acting and writing, which she listed as part of her hobbies, Nse said, it is her utmost dream to emerge the best cook in the world.

As the first daughter in a family of six, who is faced with the challenges of assisting her mother to train her younger ones, having lost her father at a very tender age, Nse claimed that she had earned a lot of money from cooking. “When I stay off the screen, I hope to establish a big restaurant in the city of Abuja. I intend to retire to my kitchen.” she enthused.

Contrary to the belief that most of the top rated actresses sleep their ways to the top, Nse had a different opinion. ‘Sleep my way to the top?” God forbid. she reacted furiously. “I think, it’s high time, according to her, “people stop making such insinuations. What happened between two people, is only between them and the four corners of the wall.

How would a third party get to know about it. I keep asking this question. One day, we will all come to have a marriage of understanding.” “It’s sad, that people use this unconfirmed act to look down on female stars. I have never heard where it happened before. It has never happened to me either. So, I can’t talk about it. I will never sleep my way to the top.” Nse stressed.

For her to excel in the industry, Nse counts on the support of her friends and fans. “My colleagues will support and teach me how to handle eventualities. Because I’m still a baby in the industry.