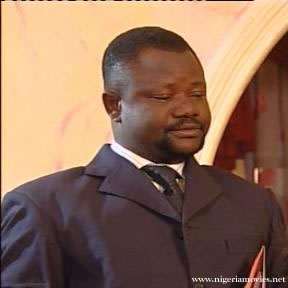 Barely six years in the home movie industry, he has so much to show for it. At the last count, that was some months ago when this interview was conducted at the popular Winnis Guest House, Surulere, Lagos he had three dozen movie to his credit. Some of them among the very best.

Lancelot Oduwa Imasuen's success in the movie industry did not come by accident. And he would gladly tell you that. He believes strongly in the maxim; experience is the best teacher. And his experience, acquired over several years of sustained practice in the performing arts, has served him very well. He is a very busy man in the movie industry, where he spends days, weeks and often times, months, producing movies. For his efforts, he sobriquet himself, "The Governor".

But how did it all begin? "I started acting when I was nine years old and acted in several productions throughout my secondary school", he revealed. Not one that gives in to double speaking, left secondary school, he was already a house hold name. That was in the old Bendel State. He featured prominently and regularly in some of the best television and radio programmes in the then Bendel State. "I acted in The Variety Show and Youth Scene, produced by the then Bendel Broadcasting Service (B.B.S.)", he said.

Having begun as a kid actor, it did not take long for him to discover his talent. He joined the Earth Pot Culture, a theatre troupe based in Benin, which according to him was the most professional troupe in then Bendel State. "I was in form two in Eghosa Grammar School, Benin when I joined the Earth Pot Culture. This was in 1984. Ossa Earlice was my director in the troupe", he said.

In 1992, he left the Earth Pot Culture, on a mission to Port-Harcourt, from where he studied and obtained the Professional Certificate in Theatre Arts.

But it was in Lagos that the break- through began for him. Lancelot was with the Nigerian Television Authority (N.T.A.) headquarters, briefly, as a contract staff attached to Memorial Hospital and Twist Away, both television programmes. " I was also a contract staff with the Federal Radio Cooperation of Nigeria (F.R.C.N.). I was presenting I Throway Salute", he said.

He left F.R.C.N. and N.T.A. in 1996 and went abroad, visiting Moscow, Malta, Sweden, and Denmark with other artists. "We went on tour abroad, with 'Obaseki directed by Don Pedro Obaseki, sponsored by the Danish government and Shell of Denmark", he added.

And did that brought much money to him? "It was a very successful experience artistically even though it was not financially rewarding". We returned to the country in 1996". He added.

Relating his experience in the home movie sector on how he launched himself into an industry that has brought him fame and perhaps fortune, the 5ft, 11 inches tall, chubby cheeked movie producer and director said: "from my experiences which I gathered from N.T.A, F.R.C.N. and Bendel Broadcasting Service (B.B.S.), it was very easy for me breaking into the movie industry, and coupled with my professional training as an actor."

He directed his first movie in 1995 titled Twisted fate. And several others followed: Chaise, Apple, Ordained, Bond, Anointed, Aziba, Burden, and Issakabaa, which according to him, was the highest selling movie last year. He also directed the Harbinger-nominee Best Director, Reel Award 2000. He produced and directed Yesterday. But what inspired him to the theatre? "There is no single person that I would say, inspired me." He asserted adding quite emphatically" " I think God inspired me. Because from Childhood, I knew my line and l have never derailed".

Lancelot seems to possess a magic wand for human management and inter-personal relations. Many who have worked with him agreed that he is very hardworking, humble and disciplined artist, whether as a producer or a director. Even as an actor, he takes his job seriously. But is there any secret behind his seeming success even in the area of organization human and perhaps, resources?

" As I said, I think God inspired me. Also, I discovered that I have organisational skill and motivational prowess".

On his experience with Nigerian artists, he said: "some of them are very professional while quite a number still see it as a child's play".

Imasuen believes that there that the movie industry has come to stay but that there is no direction, because of lack of sincerity. A lot of people wants to be the only cocks that should be crowing forgetting the dynamism of life. This has kept the industry stagnant. There is a whole lot of retrogression in the sense that instead of going forward, selfishness doesn't allow us to move forward. Everybody want to be heard at the same time".

"I think these have prevented government from participating. Because a house divided against itself cannot stand".

On what he thinks should be done to move the industry forward, against the background of its stunted progress, he said "We have to get more professional in our trade. People must be ready to accept constructive criticism".

Also, Lancelot, a founding member of the Directors Guild of Nigerian (D.G.N.) said that the claim about directors sleeping with girls before given them roles, is blackmail.

Does he have any regret being in the industry? No regret at all. This is my life. Art is my life. So how old are you? You ask him: "I am in my early thirties, he said, not willing to give his exact age".