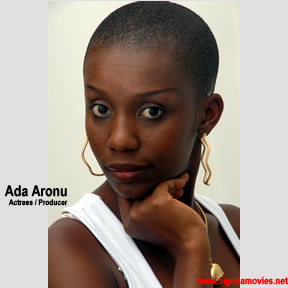 ADA ARONU is one of the youngest movie producers in the Nigerian movies industry, she has also featured in a few Nigerian films. Born of Anambra state origin in the early 80's, she is the 5th of 7 children of Mr and Mrs Christopher Aronu. She studied Mass Communication in the University Of Nigeria (U.N.N) and graduated in Aug 2004.


ADA has been in the movie industry since 1999 while still in her teens, after which she gained admission in the year 2000 to study mass communication. While in school, she was still coming over to Presidential Hotel Enugu for auditions and other activities going on in the industry. Her first film was FELONY prouced by Remy Jes ,starring Omotala Jalade and Saint Obi, though she played a very minor role but she was pleased with it. After that was another film PAPA JOHN in which she had a better role , then came NGENE, AGBALA starring top artistes like Liz Benson and Pete Edochie among others, being distracted in school by the movie jobs, she decided to concentrate on her education and made a big comeback immediately after graduation, her wish came through.

In 2006, ADA ARONU came back to fulfil her life time dream .....producing and sponsoring her own movies.... with her connection and stronghold in the industry, she produced her first film which was a big hit in the market 'SECRET PAIN 1 & 2' starring A list actor like Pete Edochie, Desmond Elliot, Larry Koldsweat, Nkiru Sylvernus and introducing Tontoh Dikeh as that was the first film ever that Tonto Dikeh acted. After much interest by various marketers to have the rights of the film, she decided to sell it to a notable company in which OSSY AFFASON movies won the bid.

IRREPLACEABLE 1 & 2 starring Oge Okoye, Pete Edochie, Desmond Elliot Tonto Dikeh and Ada Aronu herself, were the next big project she produced and d film was released in 2008 by Dosac Global, then another big one title EVIL AGENDA starring Patience Ozokwor, Mercy Johnson, Pete Edochie among others.
Currently, she is working on a tv show title CELEBRITIES with ADASLIM in which she aims at bridging the gap between nigerian celebrities and their fans as well as celebrating nigerian stars the way they deserve, just as their counterparts in Hollywood are celebrated. She has recorded in some parts of New York City, London, Paris, Enugu, Lagos and hopes to record in the Nothern part of Nigeria as well as some more interviews with the Celebrities( as she refers to nigerian stars, believing its a more respectable word) before airing in the 2nd quarter of 2009 as we look forward to the information regarding the tv stations it will air.
ADA ARONU is the MD/CEO of the famous ADASLIM PRODUCTIONS LTD