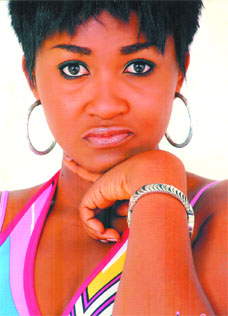 At 23 and already a star, Mary Remy, an actress, is sure a celebrity. She started acting at 18, immediately after her secondary school education, barely 5 years ago. Ever since, she has been consistent and increasing her skills and talents.
With her sexy eyeballs and hot legs, this delectable young lady is easily noticed wherever she enters.

However, stardom is not getting into her head. She still remembers her history, as it were.

On education she said: “I intend to further my education in no distant time, though I can’t enroll for a full time course due to my acting career. I want to obtain a degree in English.”
Mary spoke to Saturday Sun on her love life, family and future plans.

Acting career
Right from my childhood I have always had a passion for acting. When I started seeing actresses like Omotola, Genevieve on TV my interest grew. Then wished I were Omotola or Genevieve. I loved their acting styles, especially Omotola, who is, indeed, a wonderful actress. I love her carriage.
Our neighbour introduced me to acting when I was in secondary school. He had invited me to be part of a stage play he featured. They needed a girl to play a major character in the play. I spoke with my mum about it and she gave her consent. However, I was worried about the location.

At that time, I had not been to Surulere before. My mother told me not to worry and advised me to be careful. After the rehearsal, on my first day, I got a lot of commendations from the organizers. When I got home I told my mum about the experience. She gave her approval that I should go ahead with it.

First movie
The first movie I acted in was Home Sickness. I acted along side Chioma Chukwuka. I was the young Chioma, in the movie, while she was the older character, Chiamaka. I felt great acting with the big names in the industry. In fact, when I was offered to play that role I was happy. Thereafter, I started aiming for the top, since my dreams of joining the movie industry had been actualized.

Challenges
My age was a problem then, because most of the movies were based on the lifestyle of young ones between the age of 21 and 30 as well as older people. Owing to my age them, I could not fit in well. I was 18, a teenager and I was really small in size. Indeed, my size and age were a barrier. I could not get big roles because I was younger than the age of the characters in the movies. However, with time I started getting prominent roles. I thank God that I’m big and mature now. At 23, I no longer play minor characters. IT is either I play lead roles or supporting role.

Who is Mary Remy?
I am an easygoing young girl, charming and gentle. I smile a lot. I love meeting people, though I am not the out-going type. I am accommodating.

Role model in the industry
There are many of them. They include, Omotola and Aunty Joke Sylver. I love Uche. She is extremely good and original. I love Genevieve, though I don’t know her personally. I appreciate her style and the way she carries herself in movies.

How do you relax?
I love watching movies, at my leisure, with my family and friends. Sometimes I hang out with friends.

Typical day
When I wake up I help my mum with domestic chores. I live with my parents in Amuwo Odofin, where I was born and bred. My dad is on transfer outside Lagos. When I’m done with my domestic work I leave home for location. I return home immediately I am through with shooting.

Are you mummy or daddy’s girl?
I’m mummy’s girl. I love my mum so much and I’m fond of her.

Turning point in life
Recently, I received a letter that I have been nominated for the Africa Youth Society Role Model Award. I attended the award ceremony at Airport Hotel, Lagos. In fact, I was excited when the award was conferred on me because I didn’t expect such an award I never knew people were following my career. I believe that whatever you are doing in life, even if it’s behind closed doors, God will crown your labour with success.

Some of the people who started with me in the industry have left because they did not make a success of it. Some are still struggling for roles. I just believe that God is on my side. Most times I don’t even know how I get jobs. Most times I would be at home and they would call me on phone for a job. I appreciate God for all his mercies.

Regret
It is not a regret, but a wish I wish I had admission into the university immediately after my secondary school education. However, I’m planning to enrol for a part time programme in the university. I can’t go for full time because of my acting career. I don’t want to take chances. My education is important as well as acting career.

Embarrassment
No! I have never been embarrassed by anyone

Love life
I’m in a very serious relationship though I don’t know what it would lead to in future or what the future holds for us. I wouldn’t say I’m not ready for commitments because we are in love.

Who is your boyfriend?
He is a Nigerian. It doesn’t matter whether he is from my state or not. I don’t wish to talk about him. I can assure you that he is my very good friend and I like him.

Does he like the fact that you are an actress?
Yes! He doesn’t mind my career. He encourages me to grow, which is one of the attributes I admire in him.

Which part of your body do you think attracts men most?
Of course, my eyes are great. Sometimes I become shy when people tell me how beautiful my eyes are or that I have sexy eyes. My legs are hot and sexy. In fact, I appreciate my look.
I think God has just created me perfect and I appreciate every part of my body. I don’t have any special beauty routine.

Sense of dressing
I like simple but smart wears, though I love shorts a lot.

Are you saying you have not fallen in love before?
I believe nobody can hurt you without your consent, especially when it involves emotion. If a man decides to walk out of your life, so be it. You shouldn’t kill yourself. Besides, you made him the prince of your life by wearing him the crown on the head. If you remove the crown he is nobody to you. So it depends on how you see it. For me, no man would break my heart without my consent.

Sexual harassment
Nobody would harassment you without your consent. If you refuse to be sexually harassed nobody will rape you. However, when you choose to be harassed whoever that is harassing you may succeed. I have never experienced such since I started acting.

Future plan
I want to go international. I’m really looking forward to the international level in my acting career. I don’t know how, but I believe in God. God has been kind to me. With His infinity mercies ,He will fulfill my dream to go beyond Nollywood.

Fans’ reaction
Some would scream when they see you in public. Some would stare at you wondering where they knew you. Some call me by the name of the character I had played in movies. Sometimes I even forget I’m an actress.

Assessment of the industry
The industry is actually growing. Despite its ups and down, the Lord will continue to sustain Nollywood.